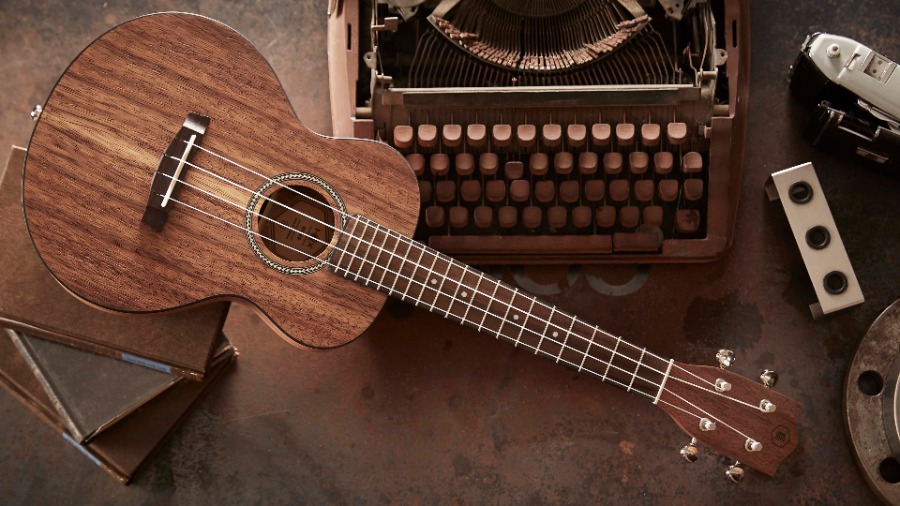 Ukuleles come in different sizes you can choose from, they are not all small and tiny. For those that want those same vibes but a little more power and size from the sound of the instrument, you should take a look at a baritone ukulele. These are maybe pretty new instruments compared to the classic uke, as they have appeared in the 1940s for the first time, but we don’t have an exact idea.

A baritone ukulele is also an excellent option for those that have guitar backgrounds, since they are a little more comfortable to play, due to the structure of the instrument, strings, tunings and much more. If you play the guitar you can seamlessly transition into baritone ukulele without a doubt.

For that reason today I will try to present you with the best baritone ukuleles in the market. We are going to take a look at the top picks in the market, options that are fail-safe, and have proven their worth. Besides that, we will definitely take a look at the things you should know before buying a baritone ukulele and so much more. Now without further ado, let’s take a closer look.

Which Are The Best Baritone Ukuleles? 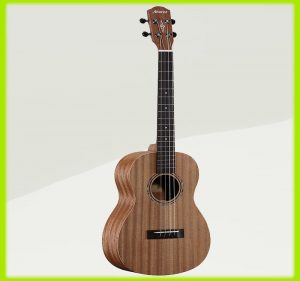 At the beginning of this list, we have the Alvarez RU22B, which is one of the best budget options for any ukulelists that want to dive into the baritone world. It delivers tons of value for its price and it is one of my favorites.

The Alvarez RU22B is a pretty simple instrument with a 30-inch total length and naked look that is very simplistic and natural. There is an abalone rosette around the soundhole and it is in a classical shape.

For tonewood, it uses a standard mahogany laminated tonewood that does its job excellently with the sating finish. There are 18 frets on the fretboard and it is way easy to play. The sound is rather easy-going and it delivers some excellent tones, which are naturally deep and pretty warm thanks to the mahogany. 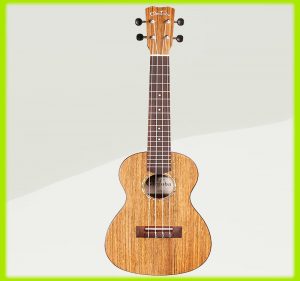 Cordoba is one of the biggest manufacturers of acoustic stringed instruments in the market, and its quality has been over the top in every instrument from them. The Cordoba 23B is not any different as it is one of the better-made baritone ukuleles out there.

The Cordoba 23B is made out of ovangkol tonewood construction with a solid top and laminated back and sides. Moving on we have the mahogany neck which is pretty sleek and the rosewood fretboard. The fretboard has a 20-inch scale with 19 frets available.

The biggest selling point of this ukulele is the ovangkol tonewood which is pretty similar to rosewood. It delivers a super mellow tone that I am a big fan of. I can say that the tone is pretty rich, warm, and smooth overall. Definitely one of the most impressive baritone ukuleles in the market. 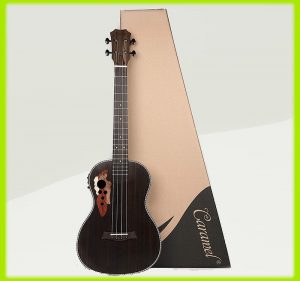 Caramel is one of the most interesting brands in the ukulele making business. The Chinese brand has released some great budget models and the CB500 is the perfect baritone acoustic-electric model that will deliver you a superb experience for the budget market. Let’s take a look.

The most interesting thing about the Caramel CB500 is that it has a pretty premium style despite being an entry-level ukulele. It is a full-sized ukulele with the classical non-cutaway shape 30-inch  long baritone body. It is made out of rosewood laminate tonewood all around.

For the soundhole, it uses a multi-hole approach on the upper side of the body. It has some attractive patterning there that makes it pretty good looking. In terms of electronics, the device has a pickup and a preamp that is pretty basic but does the job very well. 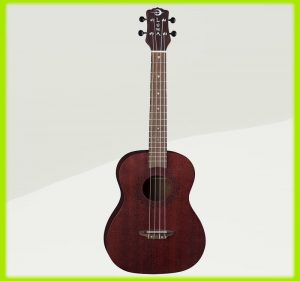 Kala is one of the biggest manufacturers in the ukulele making business, and it’s flagship Satin Mahogany series has been one of the most impressive. Notably, the Kala KA-B is the best value-based model in the lineup.

In terms of looks, the Kala KA-B is not anything special, to be honest. It has an elegant yet pretty stylish body that is simple overall. It is pretty classic and I love this styling with the non-cutaway traditional 30-inch baritone ukulele body.

It is made out of mahogany laminate finished with satin. The sound of it is pretty good for its price, bringing some deep and mellow tones that make it perfect overall. 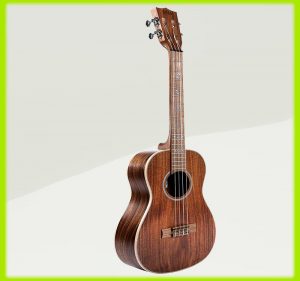 On top of the list, we have a high-end Kala, the KA-SA-B that delivers an immense performance and great sounds that will make you fall in love with this baritone ukulele.

The Kala KA-SA-B has the traditional non-cutaway baritone shaped body that is made out of acacia solid wood on top and sides. It has a soft sating finish that makes it super attractive and overall a classic instrument.

The fretboard is made out of walnut and the neck from solid mahogany to deliver a perfect performance. The sound of this ukulele is pretty much amazing as it delivers some special tones that are rich and full.

What is a Baritone Ukulele? 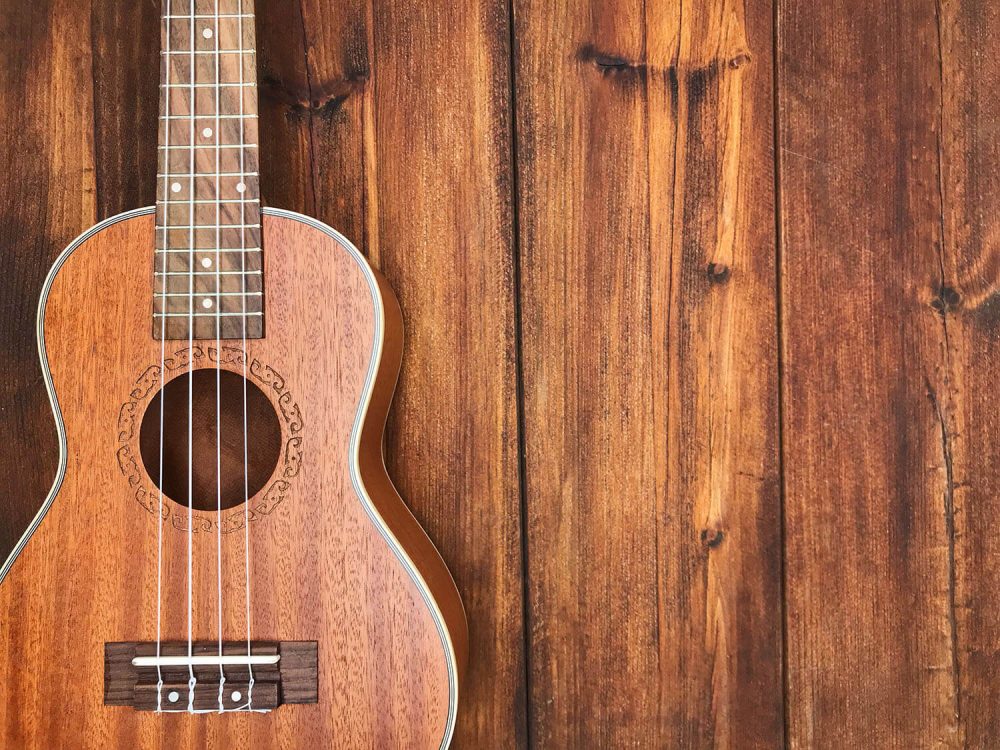 There are different types of ukuleles out there as you might have expected, and if you want the biggest and the deepest in the tone department you should take a look at the baritone ukulele. Like I said earlier this is the newest of the bunch in the family since it started to appear around the 40s, to the mainstream at least. The baritone ukulele has not been the most popular form of the instrument, however, in the last few years, it is starting to change as this instrument has started to gather quite a fan base for itself.

The baritone ukulele has a total length of 29-inches most of the time, which translates to a scale length of about 19-inches in total. Compared to the normal ukulele it has more frets thanks to the lengthier scale length. As most baritone ukuleles rocking from 18 to 21 frets, which is pretty much the same as most guitars out there. This is not the end of similarities though. As you already know most ukuleles, such as tenor, soprano, and concert ones use the GCEA tuning, the baritone ukulele has a different tuning. It has the DGBE, which is the same as the standard EADGBE tuning in guitars without the two low strings essentially.

The thing that makes the baritone ukulele interesting though is its distinct and characteristic sound, that is not quite like a uke, but quite like a guitar neither, which is pretty interesting and makes it pretty popular. While the tonewood used in its construction will play a big role in the tone of the instrument, all baritone ukuleles have similar sounds. The body is larger and at the same time the soundhole is too, and due to that, they are much louder than your normal ukulele. The tone is a bit deeper and richer, with more warmth to it than its soprano and concert counterparts, which is thanks to the size and the standard tuning.

Things to Consider Before Buying a Baritone Ukulele

Like with everything, there are some fine points you need to consider before buying a baritone ukulele, and if you stick within these you will not make a mistake when buying one.

Like most of the stringed instruments out there, when it was first invented the baritone ukulele was a solely acoustic model. The trend for the acoustic ukuleles has not fallen though, since they are more popular than ever, and you would be hard-pressed to find a model that has electric components inside. In 98 percent of the cases, you will see just acoustic baritone ukuleles. These are fail-safe choices and the best option for most of us.

On the other hand, you will find acoustic-electric baritone ukuleles that are pretty similar to their acoustic-only counterparts with the addition of electronics that are then used to connect to an amplifier. These are pretty versatile tools as you can still use them without plugging to an amp, but then again you can plug them in and play for a larger crowd. The sound will be the same in either case, but with the acoustic-electric models, you can plug them to an amp and play them for larger crowds.

One of the most popular tonewoods is Koa wood, coming in from Hawaii. It has a nice grain pattern and delivers warmer tonal qualities. However, it is considered the premium choice since it is an expensive wood to make a baritone ukulele from. So it is not the best choice for those sticking to the budget market.

Mahogany is also a very popular choice, mainly because it is cheaper than Koa to buy. However, it also has a stronger and denser body that delivers a more focused type of sound, which is a bit softer than Koa, but in my opinion still excellent.

Spruce is an interesting choice, because it is a softer wood, but has some strong qualities and it delivers a sharper sound, bright and loud at the same time. The warmth can still be heard, but this delivers a pretty close sound to the traditional ukulele.

Cedar has also been used in some baritone ukuleles and is pretty common these days. It is much stronger than spruce and it has a flatter mid response with more bass. It has a sweet and warm sound that many musicians love.

Redwood is also an apparent choice, but one of the rare ones. It delivers a sound pretty similar to cedar, but bigger with some complex qualities to it. In the USA there is some government protection, hence the rarity.

After you choose the tonewood for your baritone ukulele you should check out if it is solid wood or a laminated wood model. The solid version is more expensive and requires more care and maintenance overall. Laminate models, on the other hand, are pretty cheap compared to solid wood models and it doesn’t sound quite like a solid wood model.

Pros and Cons of Baritone Ukuleles

Sure everything has its cons, including the baritone ukulele, however, there are some interesting qualities that come in with this ukulele size. The richer and deeper sound is the biggest advantage that has made a large number of jazz players fans of this instrument. On top of that, a baritone ukulele is easier to play. While this will still depend on the person and its skill level, most of the time a guitarist can just take the baritone ukulele in its hand and start jamming without any problem. The notes and chords are pretty much the same on both the instruments, just the baritone ukulele lack to of the lowest strings. There is more fretboard space and string spacing compared to other ukuleles and makes it pretty easy to play for musicians with larger hands.

Then again this one comes with some slight disadvantages. The biggest of them being that the baritone ukulele uses different tuning from the traditional ukulele. This will make it hard for users that want to learn to play ukulele properly, as all the chords and songs that are written for ukuleles are not written for baritones. The other disadvantage or con might be that they are not as many models when it comes to choosing baritone ukuleles. However, there are some excellent options out there in this category as well.