Acoustic guitar players are not very attentive when it comes to their amplifiers, as most of them don’t need such devices. However, if one wants to progress and explore different tones, you need to invest in a good acoustic guitar amplifier that will take the performance of your acoustic-electric guitar and elevate it significantly. For those that don’t know where to start, you will find out that one of the most popular acoustic guitar amplifiers comes from Fender, the Acoustasonic 15. This amp has been around for quite a while and it looks to be one of the most impressive models out there.

The Fender Acoustasonic 15 comes as a result of many years of experimentation from the company. It has been released as to deliver the best versatility for most acoustic guitar players out there. Based on the reviews I can say that it is not a package dedicated to pro guitarists for gigging. It is more of a practice amp actually and will do that job very well. But is it really necessary and viable to invest in a practice amp for acoustic-electric guitars? It is a pretty interesting concept, and if an amp can’t gig then it is not worth buying in my opinion. So let’s see what else this amplifier offers.

When it comes to Fender products all of us have some high expectations, and for longtime fans of the company like myself this can get pretty unrealistic at times. Just by looking at the price of this amplifier you will know that it will not rattle windows, and it certainly won’t deliver you great tonal versatility, but the Fender Acoustasonic 15 has some pretty interesting features implemented that really would impress even the most nitpicky guitarists out there. Whether they do their job properly is a different thing we will see later.

The first thing you will notice about the Fender Acoustasonic 15 is that it is a small and lightweight amplifier, that makes it perfect for guitarists on the road. Many amp manufacturers have tried and failed when trying to find the balance between size and power, but the 15-watts of power for an amplifier of this size looks pretty good actually. It is a solid-state a small amp with a 6-inch Special Design full-range speaker with a Whizzer cone, that is proven to deliver an enhanced high-frequency response. Sounds nice for starters and this raised my hopes for this amp.

Don’t expect a gritty vintage tone that comes from a tube amp, as it is nothing like that, but it should be pretty clean overall and Fender wouldn’t risk releasing anything bad. The Fender Acoustasonic 15 is a two-channel amplifier, which is pretty good. It has XLR and jack slots that make this one a great amplifier for many musicians on the road that need something that they can plug both their guitars and mics in it. Sounds pretty good overall.

I have heard that many guitarists use the Fender Acoustasonic 15 with their electric guitars, and I wouldn’t recommend it if you want the dirty overdriven sounds from your guitar. But if you want to use just the clean sounds then you can utilize this one with your electric guitar. This amplifier also has a headphone jack that makes it a good one for silent rehearsal and other purposes. Before moving on I should mention that the Fender Acoustasonic 15 has a built-in chorus effect which is pretty good for delivering a rich sound when you need it.

Like I said this amplifier is pretty small and lightweight overall. That is no exaggeration, my friends, as this amplifier measures about 9.4×13.8×14.4-inches in total and weighs about 10.5 pounds, meaning that it is the perfect companion for musicians on the road. This comes from the 5-ply 5/8-inch lightweight plywood material. The design of this small amplifier is one of the most impressive ones I have ever seen as it features a light brown textured vinyl coating that looks pretty good combined with the black grille cloth and the Fender logo on it, super impressive overall. It looks super vintage and has a stripped back minimal look. Giving out original Fender Telecaster vibes with its pastel brown sandy look. The coolest looking small amp I have ever seen.

On top, you will see the handle that makes it even easier to carry around, and I had plenty of fun with this guitar. On the front face, you will see its control panel as well. A panel that includes the three aforementioned ports that will make everything easier for you. In terms of controls and dials, it has two volume knobs one for each channel, a 3-band EQ and the chorus dial to help you out. Only if it had a battery it would be the perfect amplifier for keeping it on the road.

To test this amplifier properly I plugged in the Fender Newporter Player to check its full capabilities. The sound and power of the Fender Acoustasonic 15 are definitely more than enough for smaller gigs, actually, it struck to me as the perfect amp for busking, provided you find a power source. It is a solid choice as it delivers some good tones and it amplified all the good qualities of the guitar. It was tonally balanced and the tonal shaping worked pretty well. For practice though it is pretty good for both beginners and advanced players out there.

Some users have claimed that the Fender Acoustasonic 15 is the best small amplifier out there, I can’t say that I fully agree to that though. It is a good amp, not bad in any way, the tones are pretty good and there is nothing major to complain about. I can praise its great power to size ratio and its attractive price, but it has limited applications. Then again if you want a small practice amp or for playing in smaller venues this one is a perfect pick. 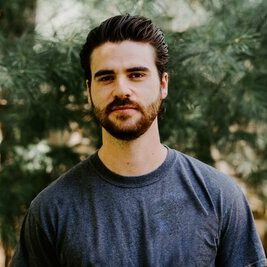 I am the lead guitarist & singer of my band "Beyond Dreams". I am also the founder of this blog, in which i write on my free time.