Even though this is one of the most affordable acoustic guitars by Fender, it can also be considered as the most enjoyable one too.

For that price, I wouldn’t expect more than a cheap guitar that would break in less than 2 months, however, Fender managed to make the FA-115 with a solid spruce top. Yes, even at that price. When they released this guitar, everyone was surprised because a guitar having a solid spruce top costing less than $200 was unheard of, but of course, it’s Fender, and they always come out with amazing things.

Of course, they had to make some compromises so they can add a solid spruce top to this guitar, but at that price, it’s understandable.

You can play this guitar for many hours at a time without feeling any discomfort because its very easy to hold and I noticed that its size is perfect for me. After all, we all know that a solid spruce top combined with the X-Bracing is enough to get great sound quality.

Other than the solid spruce top, what differentiates this guitar from other guitars in this price range is its sound. The sound difference is very noticeable when compared to similar guitars. Since it has a solid top and a dreadnought body, you can be sure that the sound will be loud, clear and strong so you don’t have to worry about that at all.

If you’ve been reading the GuitarSquid blog for a while, you probably know how much I like simple-looking guitars. This is one of them and I definitely love it. We can clearly see that it is designed to be both beautiful and sound amazing, so Fender did a great job in that department.

The playability of the FA-115 is another thing to talk about. I’ve played many guitars in mylifetime, and I can say that the Fender FA-115 performed similarly to the higher-end guitars when it comes to playability because of the design of its neck. That specific design makes it easy for your hands to move up and down, so you won’t get tired and your hands won’t get irritated while playing it.

Overall, I don’t know how Fender did it, but they managed to release an amazing guitar to the market that comes at a very good price, which is probably very hard to beat by its competitors, and we won’t see a better value-for-money guitar for a long time. Of course, like anything else in the world, this guitar has its downsides too, but for beginners, this guitar is definitely the go-to option along with the Fender FA-100 and i would confidently recommend this to anyone that asked me for an entry-level beginner acoustic guitar. 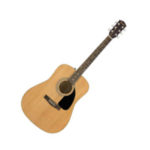