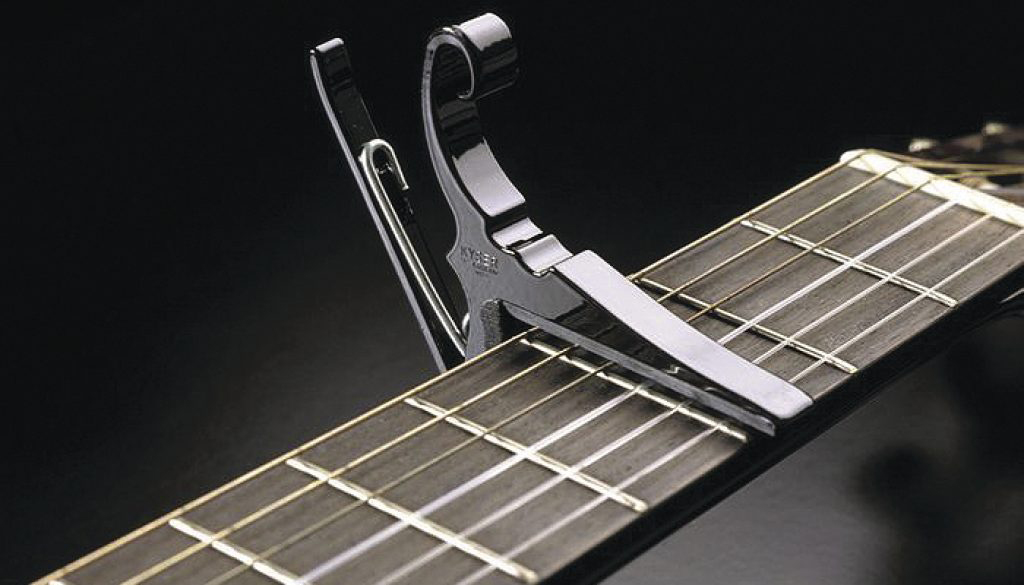 What Is A Capo?

A capo is a bar that usually straps or clamps across all of the strings at a particular fret. The capo effectively acts as a moving nut (or as a bare finger). It raises the pitch of the strings.  Basically, all guitar shops stock these things and they start off pretty cheap (around $5 at a guess).  I only have a cheap one which suits me fine and I don’t know what extra benefits the more expensive ones offer as I’ve never used one.

What Do You Use A Capo For?

I’ll cover each of these in more details below.

How Do You Use A Capo? 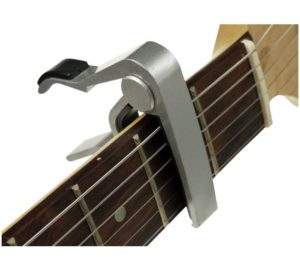 Let’s learn by example.  Strap a capo on at the second fret.  You need to make sure that it’s on tight enough so that it presses all six strings down to the fretboard properly, ie, they should all ring out clearly when you pluck them and none should produce a muted sound.  Note that putting the capo on too tightly damages the strings and they will need to be replaced more regularly, so try and get the fixing of the capo right.

So we have the capo on at the second fret, now when you pluck the strings without fretting anything, the notes have all moved up in pitch by 2 semitones (or two frets). From Low E to High E (thick to thin) the notes of the strings have become F#, B, E, A, C#, and F#.

Now, if we play a normal open neck chord, say A minor, the chord shape used is the same as without the capo, but because all of the strings have gone up in pitch by two semitones, then so will the chord and as such, it becomes B minor.  Thinking about it, that’s all that’s happened, the capo now acts as the first finger barring all of the strings at the second fret, as would be required for a B minor barre chord, and the open A minor shape makes up the rest of the notes required to make up the B minor Chord. Note that the fingers should be placed as the A minor chord (1st to 3rd fingers and not 2nd to 4th).

So taking the chords from the lesson knocking on heaven’s door, we would change the key of the song up two semitones from G major to A major.  The open neck chords used are G, D, Am, G, D, C, but these now change to A, E, Bm, A, E, D.

Changing The Key Of a Song 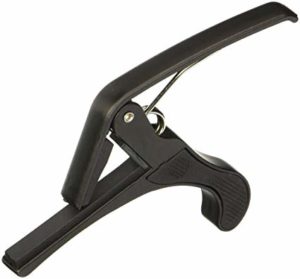 This is the main use of the capo. By strapping the capo on at the second fret, we have easily transposed the key of the song.  This comes in real handy if like me, you enjoy singing along as you play.  I ain’t got the best vocal range in the world, so quite often I have to strap on a capo and move it to a fret that brings the key of the song into my vocal range for singing (and hence reduce the amount of windows that get shattered in the house).  Its the same as playing in a band, you may find that you sometimes have to transpose the key of a song to suit the singer’s voice, and this is the quick way of doing it. Otherwise, you’d have to work out the changes to the chords on paper and then play those, which in some cases will bring up a lot of sharps, hence you’d need to use a lot of bar chords which could be problematic in some cases.  It also gives you another set of chords to remember.  With the capo, all you need to do is remember one set of chords and which fret you need to strap the capo on at.

An Aid For Small Hands

If you have small hands and you find that playing bar chords is hard, then you’ve probably already spotted the advantage. You can use the capo at the desired fret for the key of the song and hopefully reduce the amount of bar chords you need to play.  The other advantage is that the higher up the neck you place the capo, the smaller the distance between frets, so harder chords become easier to play.  For instance, try putting the capo on at the 7th fret, and now try an F bar chord, it should be a lot easier to play ( as long as your guitar gives you good access, ie, the body isn’t in the way).

Using the capo as a string mute

This method is only handy for advanced techniques of guitar playing, where loose notes are prone to ringing out which are undesirable (and you don’t need to use the open strings), two-handed tapping for instance.

Place the capo lightly over the strings at the first fret.  Do it so that the capo only mutes the strings and does not press them fully to the fretboard.  Of note, this won’t be possible with all types of capo, but you could tie something around the strings instead like ribbon, to produce the same effect.

When two-handed tapping, any strings you accidentally pull off will no longer ring out as they will get muted by the capo.  If your recording a large part of two-handed tapping, I’d recommend you try this, as it gives you one less thing to worry about.

When adding a capo to your guitar, it will go straight out of tune.  This is normal.  The first thing I do after adding a capo is re-tune it.  You need to retune to the respective notes to which the capo has been applied.  Eg, normal tuning notes from low to high are E A D G B E, if we add the capo at the second fret, then we have to tune to the 2nd fret notes, which are F# B E A C# F#.